A few decades ago, law enforcement “specialized units” began the transition from the 9mm subgun to the more-effective .223 / 5.56 weapon systems. My first select-fire 5.56 system was a 16-inch barreled rifle, which transitioned over the years to a few different, shorter 10-to-11.5-inch barreled AR systems.

From their inception into the LE ranks, these shorter-barreled systems grew so popular that many uniformed officers and detectives often spent their own hard-earned dollars to purchase personally owned short-barreled rifles (SBRs). This included the additional COST and WAIT TIME for the associated federal tax stamps. #WorthwhileInvestment

It didn’t take long for the popularity of the SBR to carry over to the general population, and they too began to use, carry, and enjoy these shorter-barreled ARs.

The Springfield Armory® SAINT™ Edge Pistol brings full circle the benefits, utility, use, and overall fun factor of the medium-barreled AR platform. As with most of the SAINT™ line, you’ll find: 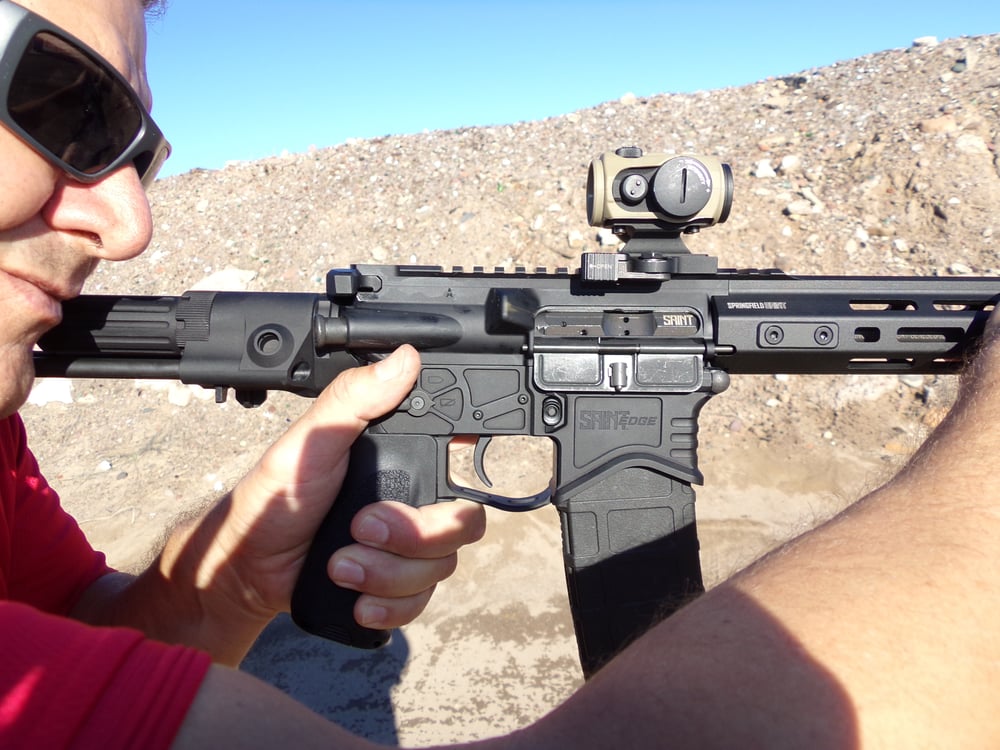 The “Edge subtext” also finds this Springfield SAINT™ Pistol with:

The pistol setup continues to impress with a Maxim Defense CQB adjustable brace with quick detach (QD) points on each side and a 10.3-inch lightweight, Melonite-treated barrel.

This SAINT™ Edge Pistol is well balanced and light, weighing in at 5 pounds 11.5 ounces. The recently updated ATF-approved adjustable pistol brace is customizable from an efficiently sized .223 / 5.56 to a very compact AR system. This short and easily accommodating format works excellent not only for quick manipulation, but for backpack carry as well.

The hand guard is the perfect length; running the maximum length of the barrel. The finger stop is small but deliberate, giving an index point to the supporting hand. The billet lower receiver has enough contours to give it character. And from a practical sense, the SAINT™ Edge Pistol has an enlarged magazine well to facilitate smoother reloads. 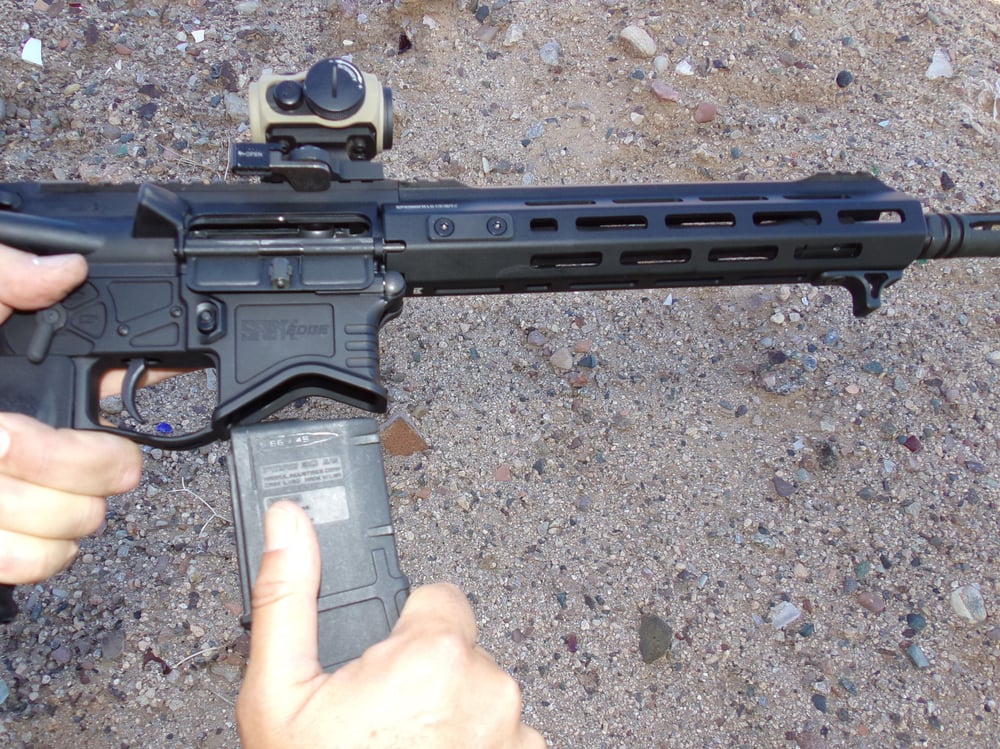 The ambidextrous safety is not only a plus for us left-handed shooters, but aids in the simplification of non-standard shooting positions. At a recent LE rifle training session, I made special note of the added bonus that ambidextrous safeties bring. A portion of the class involved bi-lateral shooting with AR systems. The majority of the systems were NOT equipped with ambi safeties. I found it interesting and concerning that many of the right-handed shooters were struggling to manipulate a single-sided safety while the firearm was left shouldered. When you have the benefit of an ambi safety, as with this SAINT™ Edge Pistol, the thumbs can be used to manipulate the safeties when working the trigger with either hand — which is priceless. #TrainingConsistency

When first testing the SAINT™ Edge Pistol, I was with fellow Springfield SME, Steve Tarani. We discussed the light weight, the great handling and balance of this AR platform and also how nice the trigger is for an “off the shelf” gun. Wanting to get an exact weight of the trigger, the following day I obtained a trigger pull gauge with actual hanging weights. This type of gauge gives the most-precise results. The trigger broke at just under 4 pounds. What was more impressive though was not necessarily the weight, but the crispness of the trigger and the efficiency of the trigger’s reset.

As with all new firearms, before firing, I ran patches down the bore with several bore brush strokes. Lubricating with the enclosed Lucas Oil, I zeroed and ran the gun with a mixture of 55-grain ammunition. Zeroing this SAINT™ Edge Pistol at 50 yards, I was able to produce several consistent 1-inch groups with a non-magnified red dot optic.

From first shot to last, there were no malfunctions.

Surprisingly, this AR shot very soft considering its size. I did a few double takes to make certain that someone had not, unbeknownst to me, installed some type of custom muzzle break device. None was found.

Having access to a shoot house, I was able to work the SAINT™ Edge Pistol through small openings and doorways — Yet again reminding me why the 10-to-12-inch AR systems are so popular. You just can’t beat the compact configuration when working in and around structures. This gun is simply TIGHT. Due to its size, handling characteristics, slim handguard and profile, it works well in confined spaces, God forbid the need arise.

In normal life, there are needs, wants, and really wants. Like a well-built car from Bavaria (callout to my European heritage) this SAINT™ Edge Pistol is a REALLY WANT. Springfield Armory® sent this to me as a test gun, but I will definitely be purchasing one and finding a spot for it at home — or more likely in my daily driver — a fine American-built pickup truck.

In fact, I may just need to get 2, as this SAINT™ Edge Pistol could possibly be the perfect protector — the one you’ve been waiting for. Your search for the Holy Grail in a defensive AR weapon system is over.

Previous: Consistency Is King
Next: Range Fun With an XD(M) OSP & a Suppressor – A Regular Shooter&#039;s Rundown